On the 21st June 2017, we visited the Durham Mining Museum as part of the research process in preparation for the WYWY project. At the museum we met our representative and specialist, Jack Inch. Jack Inch started to talk about the different rocks and methods used to separate/extract coal from rock.  Jack then went on to talk about how the mine looks from above (known as a birds eye view). During this part of the visit, I learnt that the mines ran under the sea. Jack Inch demonstrated this by using plastic sheets which identified mines using specific co-ordinates. I later leant that this map was a surveyance map and was used to check the conditions of the mine. This map would also be used in the scenario of a disaster, the rescue team would have been able to apply their knowledge of the disaster and figure out where survivors may be located in the mine. Jack then took us into another room which featured pictures and artefacts relating to the mines. Jack then explained the job of a rescue team member. The most interesting artefact that I saw was the self-rescuer. It was a metal tin, with an oxygen supply inside the tin. There was a clip that Jack explained went in your mouth and allowed the miner to breathe through it. Then we visited the coal mine (set) downstairs. Jack showed us (in two’s) the mine, enabling a more detailed tour. The first part of the set was the seam. I thought that this was very interesting because it was built with a plastic coal face. A plastic pony was stationed at the side and this helped me picture what it would be like in the mine, and the height of a pit pony. Next door was a room which featured an example of the stables. The stables had all the essentials needed; a water bowl and a place to lie down. Through another door was the register office, where miners would hand in their tokens and be assigned their jobs for the day. We then walked back through the museum and thanked Jack Inch for showing and telling us about the mines.

I thoroughly enjoyed the visit to the Durham Mining Museum, because I found it inspirational and informative. 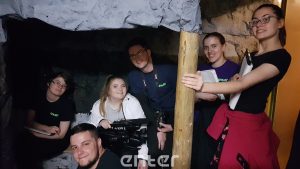